The location is Explosion – the museum of naval fire power in Priddy’s Hard, Gosport. Explosion is the award winning museum of naval warfare created within 18th century buildings at the Royal Navy’s former Armament Depot. operational through the battle of Waterloo and finally decommissioned after the Falklands conflict. This case file is the result of several visits to this location from 2010 through to 2014.

Admin Block
This location is alive with audible phenomena – singing and laughing has been heard here, as well as the sound of keys in the upper corridor. Things have often been moved in this location, from chairs to trigger objects, but it is not just inanimate objects reportedly affected. People have reported being pushed here, and aching sensations in their shoulders, as well as a feeling of being pushed down upon. Hair is often reported as being brushed. There is thought to be a black magic connection to this part of the location, and as with 309 and 316, there is thought to be an elemental in this location too.

C-Magazine
Unexplained noises are heard, including the sounds of trolley wheels. A white haze has been seen by the doorway. People report seeing movements in the shadows, as well as battery drainage on equipment used. As for physical phenomena, people report the feeling of being pushed, and things being moved in the room. There are also reports of chains moving.

Grand magazine
Footsteps and things being thrown have been heard, along with some EVP recordings. People report having seen a figure standing in the doorway. As for reports from mediums, some people have been linked to the location – a female spirit, the caretaker of the building, a separate male spirit, and two children. 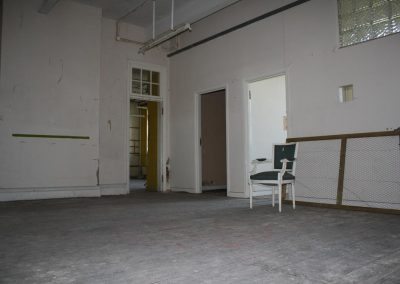